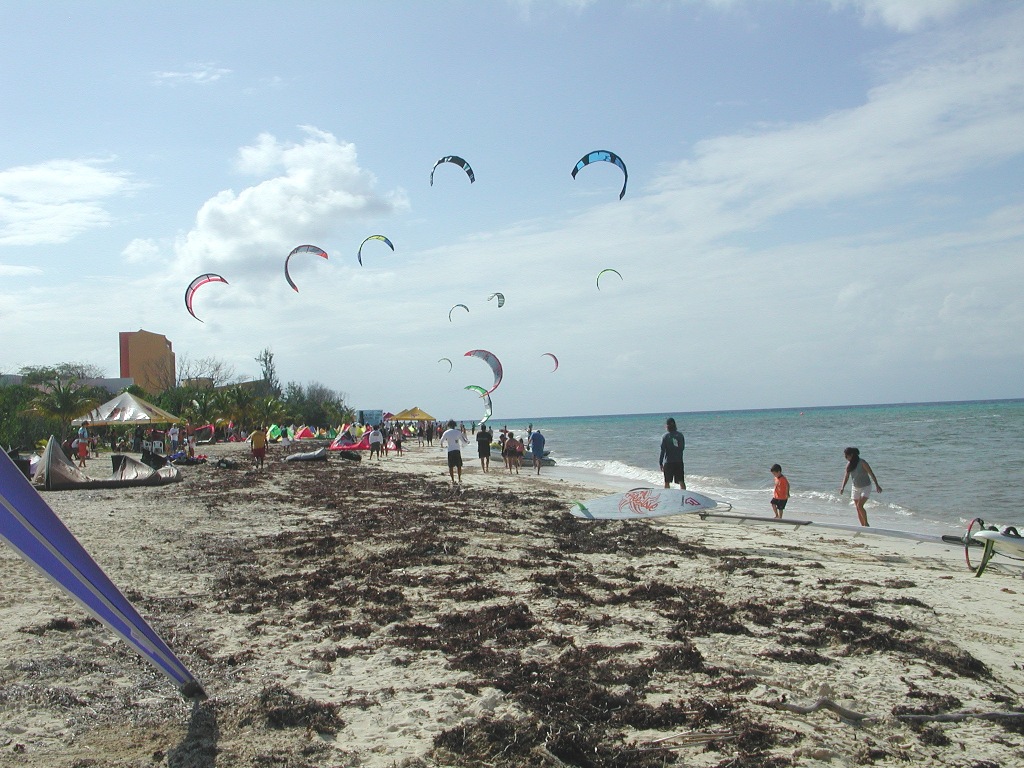 Whether you’re new to the sport, or an unhooked pro, Cozumel Island in the MexicanCaribbean offers endless possibilities for kiteboarding.
In the past decade, a new form of wind-powered fun has emerged, in the form ofkite boarding.
While a windsurfing board is pretty much like a surfboard with asail attached to it, a kite board is more like a wakeboard, with propulsionsupplied by a large traction kite held and operated by the boarder.
With largekites for light winds and small kites for high winds, the energy brought undercontrol by the boarder is considerable. In Dan's words, "Kite boarding islike wakeboarding behind an airplane,
with you piloting the plane and ridingthe board., it is a ski boat in the sky".
You don't have to know how to windsurf to learn how to kite, and the payoff isthe ability to fly.

Although the sport of Kite Surfing or Kite boarding is fairly new, it is not aone-man invention and actually, people have been playing with the concept for along time. In the 13th and 14th centuries in China and Polynesia, kite sailingwas a form of transportation in the Pacific Rim!

In the early 1800s, British inventor George Pocock enlarged common kites andflew them in groups to pull carts on land and boats on the water. His effortsresulted in what were, at the time, the fastest speeds on land and water.

In 1919, American inventor Samuel Cody kite-sailed across the English Channel.  In the late '50's, individuals used the concept of being pulled by aparachute/wings above and on water.
In the mid 1970's, American kite designer Peter Powell of Florida built atwo-line delta kite with which he sailed small dinghies. These kites weremarketed for use with boats and buggies, and in fact, one was used byEnglishman Keith Stewart with a nine-foot catamaran to cross the EnglishChannel.

In October 1977, Gijsbertus Adrianus Panhuise (of the Netherlands) received thefirst patent for the sport. The patent, as well as the sport, is defined as awater sport using a floating board of a surfboard-type where a pilot standingup on it is pulled by a wind-catching device of a parachute-type tied to hisharness on a trapeze-type belt. Although this patent did not result in anycommercial interest, Gijsbertus Adrianus Panhuise could be considered as the originatorof Kite Surfing.

Cozumel has some of the best conditions for all wind and water sports, sokiters from all over the world come here to enjoy the perfect waters, steadybreezes, reasonably flat water, and  world-class teachers to show you how.The north part of the island is the best, as there are frequent north windsthat blow in steadily.

Cozumel has had a champion windsurfing team of kids from 14 to 18 years old.They have won first, second, and third places in many events and are considerednational champions.   Cozumel will always be an attraction for windsurfersas well as kite boarders.

In the past couple of years, a new form of wind-powered fun has emerged inCozumel, in the form of kite boarding.  A kite board is more like awakeboard, with propulsion supplied by a large kite held and operated by theboarder. With large kites for small winds and small kites for large winds, theenergy brought under control by the boarder is considerable.

There were only two kite boarders on the island until  2000.  Thereare now many licensed and certified kite instructors and many recreational kiteboarders in Cozumel.

Raul de Lille pioneered the sport in 2000 in Cozumel. He makes it look so easy.He was born in Cozumel and grew up knowing the waters and the winds of Cozumel.He is Mexico´s windsurfing champion and has traveled all over the worldcompeting windsurfing. He became a PASA certified  instructor and now is afull time kite board instructor.

Dan Withington of Dune Buggy Tours learned about the same time. Raul taughthimself and at the same time, Dan learned with him. The northern part of theisland is the best place to kite board on most days.   With only skiingexperience behind him, he learned to kite board.  He is now a PASAcertified instructor.  In Dan's words, "Kite boarding is likewakeboarding behind an airplane, with you piloting the plane and riding theboard."

You don't have to know how to windsurf to learn how to kite, and the payoff isthe ability to fly.
If you're interested in getting connected with certified instructors in kiteboarding, then please email or call us and we'll get you set up.

Kite boarding has quickly become one of the world's leadingextreme sport developing with its high tech equipement now readily available. Cozumel has one of the perfect areas with many variables all comingtogether to provide the perfect winds.

Whether   you’re new to the sport, or an unhooked pro, Cozumel Island inthe Mexican Caribbean offers endless possibilities for kiteboarding.

Kiteboarding has become one of the most popular recreation water sports inCozumel.  When the wind blows in Cozumel -- and it does quite often --gliding the turquoise clear waters of Cozumel is hands down one of the mostmagical experiences on the island.

Cozumel Kiteboarding came out from the idea of a group of local kiters with onecommitment: Give information about where to kite in the island of Cozumel andhelp others locals and tourist to get into the sport safely and fun.

Our Mission is to make Cozumel a Top Kiteboarding destination in the world,diffusing information from the island to make of your vacation andunforgettable experience.

As natives from the island we have all the knowledge as to where to practicethe sport and we will take you to the greatest destinations to have the besttime ever while you Kiteboard.

WHETHERyou’re new to the sport, or an unhooked pro, Cozumel Island in the MexicanCaribbean offers endless possibilities for kiteboarding. 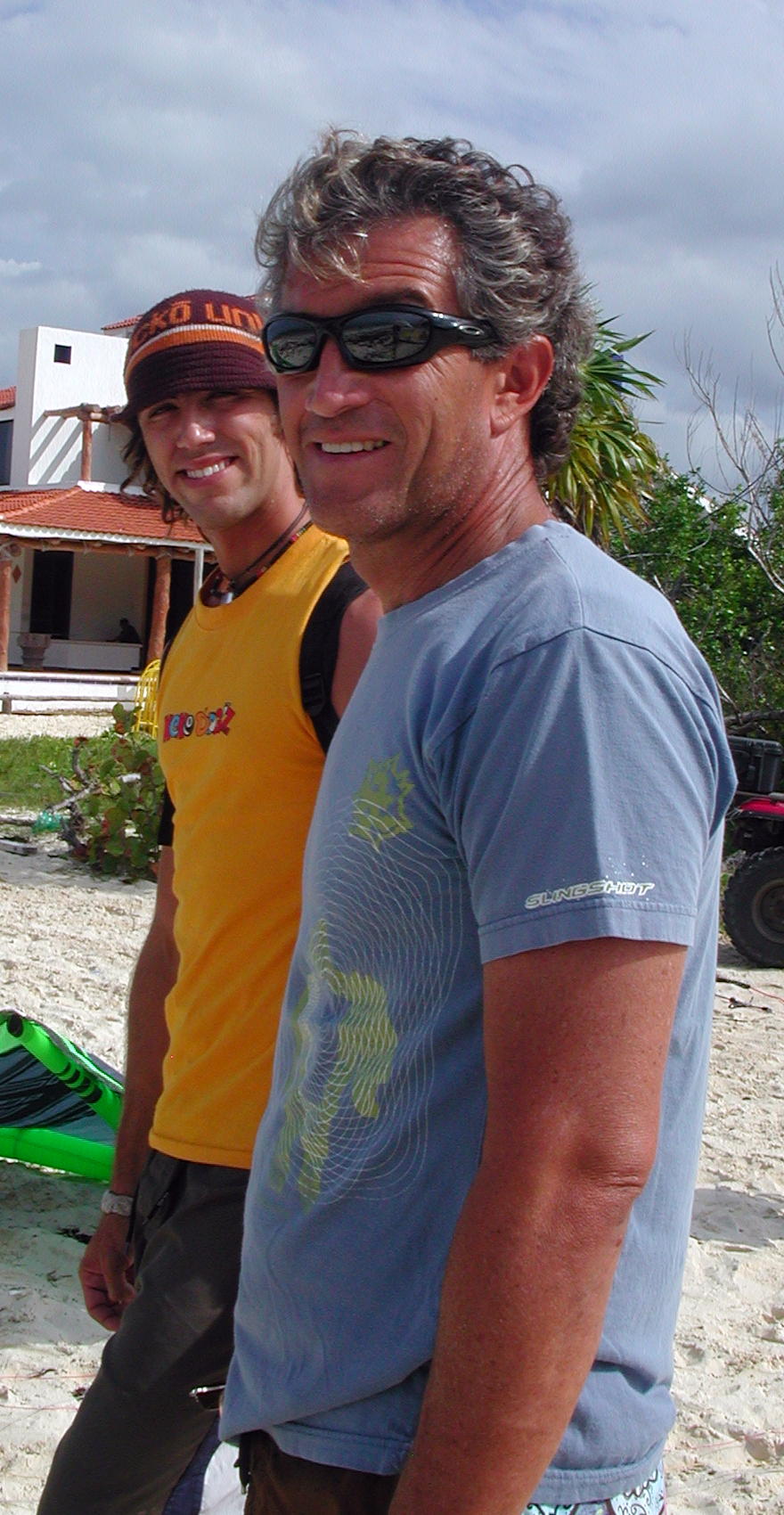 Olympic windsurfer Raul De Lille had a successful career as a wind surfer. His travels took him all over the world to compete in conditions thatwere unlike those of Cozumel.  He return a champion, cheered on by Mexico,the people of Cozumel and his family.  His children grew up on his windsurferand thus two of them, Jazmine and Jadie went on to became national champions in windsurfing aswell.  he now has a kiteboard school, located in the Country Club Estates. He and his 'partner' Nicole have a lovely Boutique Hotel that is just steps away from the beach.

He became interested in kite boarding as soon as he found out about it. He taught himself, and at the same time, taught Dan Withington, and mastered the new sport. He continued to train with REAL kiteboarding and is now a full time instructor. He was one of the first to introduce kitesurfing to Cozumel.  Raul isone of Cozumel's top instructors of the island.  Be sure to book yourreservation for instruction in advance.  He is a PASA certifiedinstructor.

Dandidn't have any windsurfing experience but grew up skiing in rivers, on snowcovered moutains,and remained a toned athlete through the years.  AfterRaul and he learned to kite, the two of them learnedtechnique and practised together.  Kiting, like most water sports requirestwo people; a buddy system. So they practised together.  He has enjoyedcompeting in different kite meets and has won a few awards.  His most important student is his son, Adam. Adamhas been kiting professionally, sincethe PKRA 2007 world tour. Dan is a PASAcertified instructor.

Jadie graduated from college in 2010. .  She has lived in Cozumel all her life, except those four college years.  She wasa champion wind surfer while she was in junior high school.  She loves to come home to Cozumel to visit her parents and to kite. She is a strong advocate for cancer research. She participated in the PKRA tournament in 2008 in Playa del Carmen 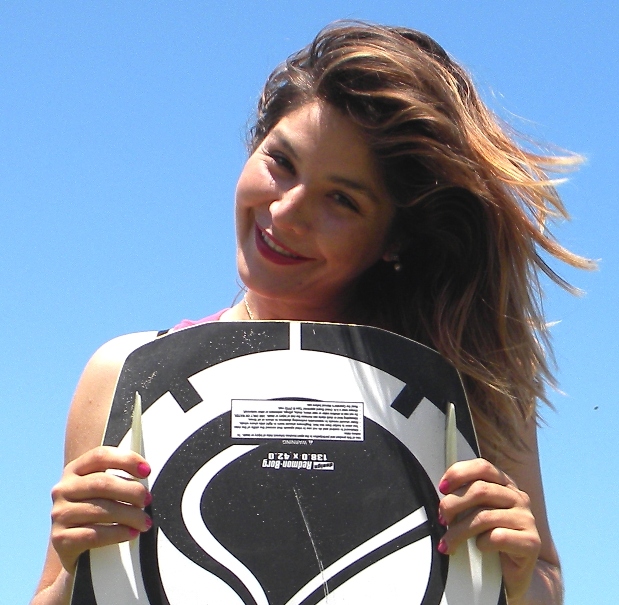 Jessica began kiteboarding in La Ventana in 2008. She was born and raided in Cozumel. &In 2003, she spent two years in the USA in high school, and then a year in Florence, Italy, where she learned to speak Italian. She now lives in La Ventana, where she is introducing a new event center, Playa Central. Playa Central will be hosting the Mexican National tournament Dec. 17-20, 2010. The event center at Playa Central will include a bakery, opening July 1, a beach club, fine dining, a kite school, kite store, and a much, much more! Check our here website www.laventanakiteboarding.net. Jazmin is is also from Cozumel has recently traveled "down under' in Australia and Fiji. She is know as a very good professional kiter who is also an instructor. She comes to Cozumel to kite every chance she gets. She was also championwind surfer while in junior high.  Her skill as a windsurfer hasmade her excell at kiting. Summer months, she is usually in Oregon, kiting at the Gorge.. She'll have some good experiences when she returns.

Jose recently changed from being an avid diver to beingan avid kite boarder. He has lived in Cozumel for about 20 years working with tourism and even being involved with a kindergarten school. Jose kites as often as he can.. 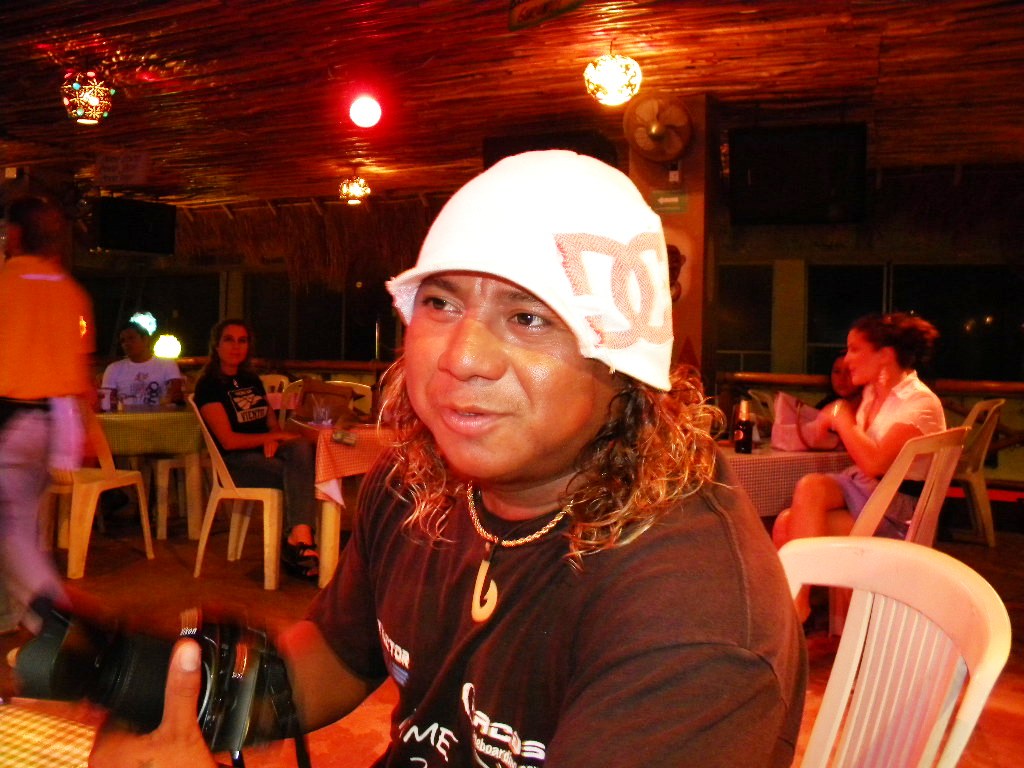 Paco Chan grew up diving in Cozumel. He learned to kite board about six years ago, and is now a certified PASA instructor. His unique fashion style has given him the unique opportunity to appear in many kite magazines. He is now one of Cozumel's best kite boarders. He won second place in 2010 VIMI racing, in Cozumel. 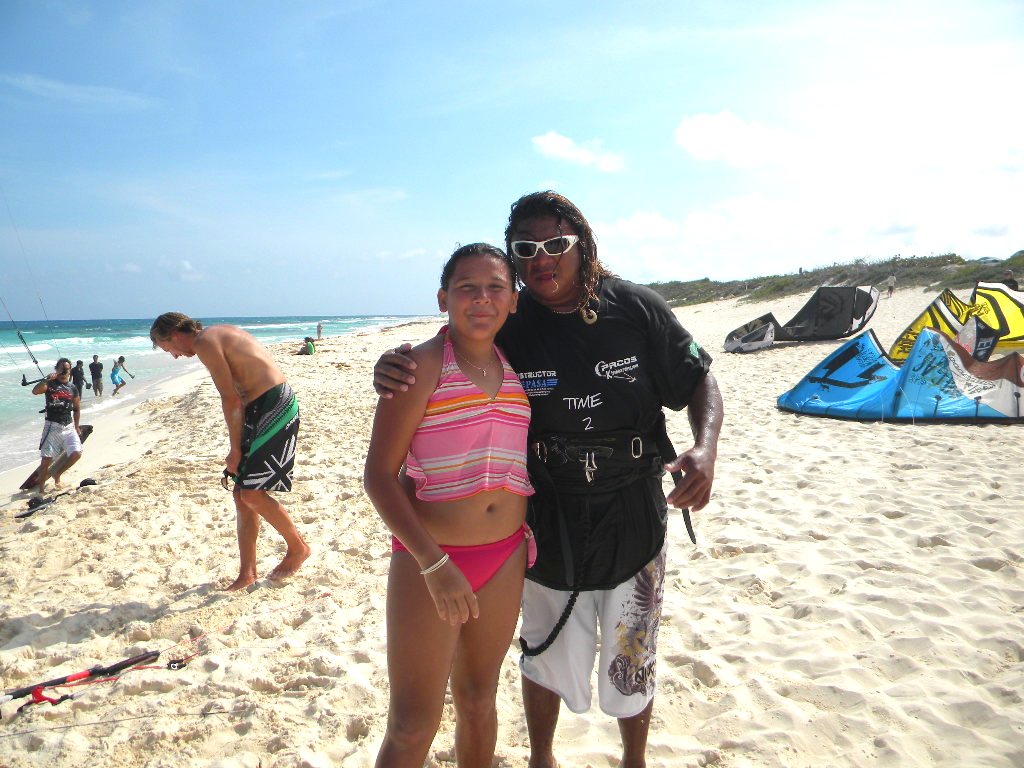 When coming to kite, the area known as Kite Beach has a few rentals homes tooffer.  Large beachfront homes are Villa RosMar, and VillaPresidente. 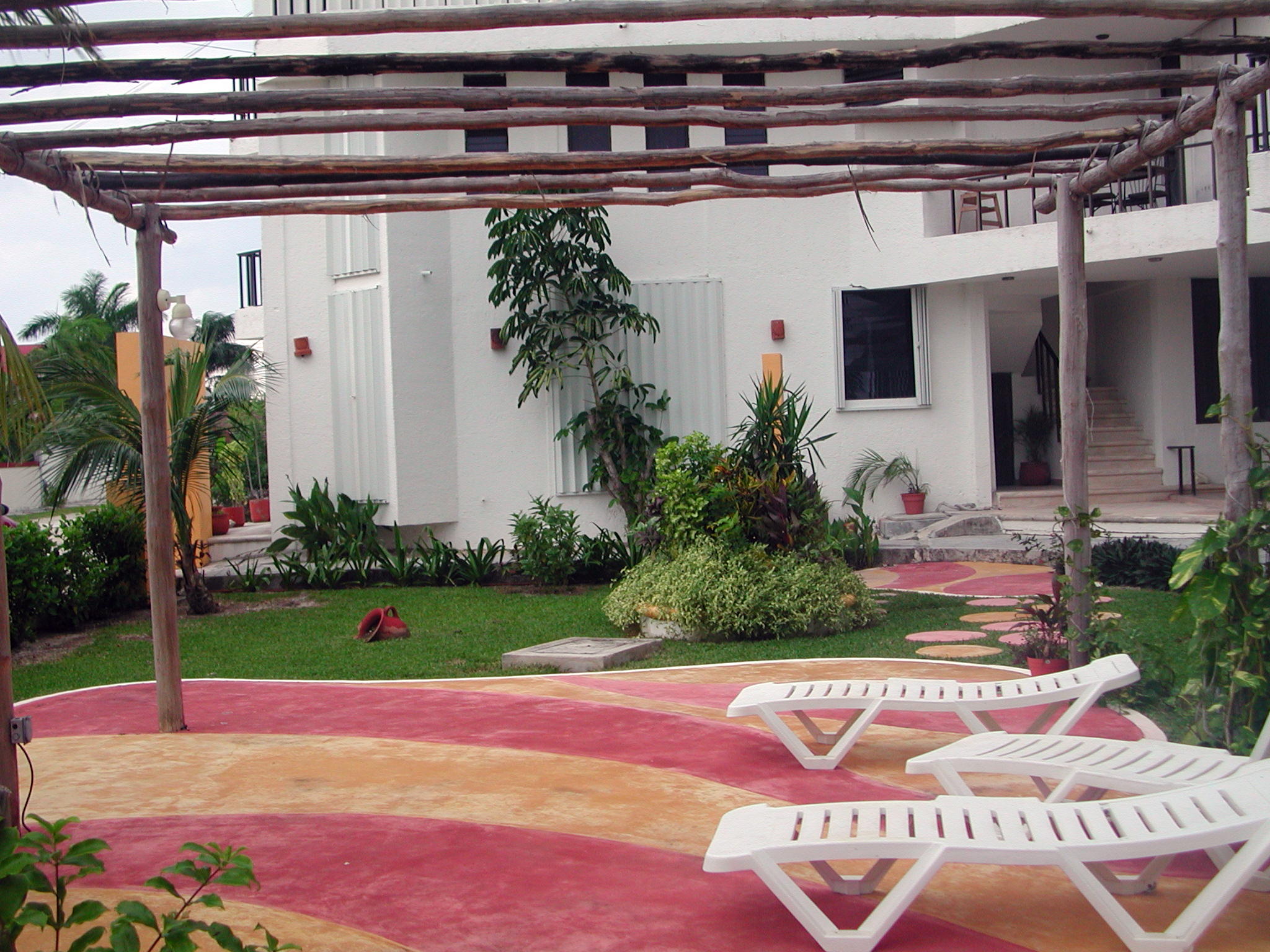 There is a terrific condo in Casa Blanca Condo; Vista Bonita, (one bedroom-no children due to safety issues).

There is also a condo in a home called Casa Viento with four different suitesto offer.

The Country Club Estates beach is called Kite Beach.  :
This beach is big, with soft white sand and lots of room to launch (andlunch!). All beaches in Cozumel are public property and everyone has a right touse the beaches of Mexico.  The owners of the private homes prefer to callit a private beach, mainly because they don't want kiters to set up 'camp' infront of their homes or ruin the beach. Try to stay further north along theshore, father away from the residential homes.

Wind Direction: NE, N, NW, W
Water Conditions: Light Chop
Beach: Big, sand
Sealife: The occasional stingray, so be sure to shuffle your feet in the sandwhen going out in the water. This will quickly scare the buggers away.

Ixpalbarco (aka "The Wave Ranch") : This remote spot got it'snickname for a reason. Small to medium size perfect kickers with the occasionaloverhead + makes this the most ideal riding spot for wave junkies. Access isvery limited since the Hurricane -- there is most often a policia guarding theentry. Contact Raul De Lille or Adrian (see Lessons, below) for Local-Bro access. You mayhave to pay, but it's worth it.

Wind Direction: E, NE, SE
Water Conditions: Waves
Beach: Big, sand with rocks. Exposed reef in the water. Be careful! Don't bodydrag in the shallows!
Sealife: I haven't seen anything yet other than some beautiful birds and theoccasional beach iguana. 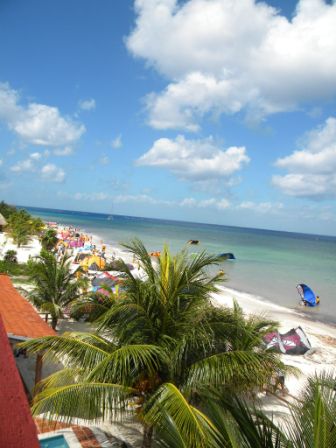