There are two options a visitor can take to get to the mainland. Both are efficient and easy.

One can fly or take a boat to the mainland. There are commercial flights to many major cities like Cancun, Merida, Mexico City, and others. 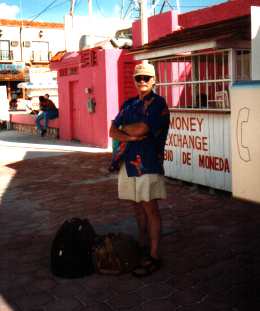 There is a passenger ferry from 5 am to 11 pm going back and forth from Playa del Carmen and Cozumel. The newest water jet ferry—Mexico III—now only takes 35 minutes. The older ones take about 55 minutes each way. The cost as of December 2001 is $146 (Don't panic! That's Pesos! Currently about $15, round trip). The ferry is located in front of the main plaza. For more information call 872-1588.

Once you get to the mainland, transportation is no problem. In Cancun and Playa Del Carmen, you can find car or jeep rentals, buses, and taxis. You can rent a taxi for the day. Discuss the price with the driver before getting into the car. This option makes it easy to get around and have your own personal tour-guide. Most drivers are happy to point out the sites, give recommendations, and wait in a pre-designated place. One advantage to this option is that you can drink and not worry about driving.

From Playa Del Carmen, you can visit Xcaret, Tulum, Xel-Ha, Akumal, Playa Aventuras, Xcacel, Paamul, Chemuyil, and Coba. You should choose which direction to venture before going. We recommend that you spend as much of your time as possible in Cozumel and save the mainland for a separate trip/vacation. But if you don’t plan to be in this region again, or if it’s your first time here, the trip to Chichen Itza is a trip not to miss. You can’t come all this way and not see Chichen Itza.

To plan your trip, we can assist you. Let us know how many plan to go and how you want to travel. We can make your reservations.

Archeology in Cozumel and the surrounding area on the mainland is fascinating. The Maya civilization arose in the area and many fascinating buildings and temples are available to tour.

To get to Tulum the easy way, contact Veronica about our Trip to Chichen Itza by airplane or bus.

One of the most famous of all Maya cities is accessible by plane from Cozumel. The earliest buildings date back from 500 B.C. and are typical Maya, while those built from the 10th century on include Toltec symbols. Dedicated to the worship of Kukulcan, the feathered serpent, Chichen Itza was the most important civic and religious center of the Maya in the 11th and 12th centuries, and was also the destination of pilgrims from all regions of Mesoamerica. Chichen Itza developed as a major Maya metropolis in the seventh and eighth centuries. Evidence of early Mayan achievements can be seen in the architectural structures and carvings throughout the complex. The ruins here are striking and for the most part well-preserved.

This sacred spot will captivate you once you see “TheCastle”, “The Observatory”, and “The Ballcourt”, where many sacrificial ceremonies were performed. Architectural highlights include “El Castillo” which is actually two seventy-five foot pyramids leading to a small temple at the top. Inside the temple is the famous sculpture of Chacmool, a reclining figure connected with the cult of heart sacrifice. “The Temple of the Warriors/Templo de los Guerreros”, has some of the finest sculptural and relief carvings in the district, including images of warriors, eagles devouring human hearts, and jaguars. Inside one of the two vaulted chambers, one can still see colorful artistic impressions of warriors, priests with offerings, and other personages on thrones. 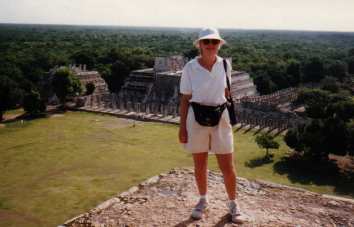 The “Sacred Well/Cenote Sagrado”, appears to be a natural limestone sinkhole, but there is evidence that a series of stepped platforms was created on the south side to accommodate spectators. Between 1882 and 1968, exploration of its depths — which range from about forty to sixty-five (40-65) feet — uncovered many objects, including carvings, banner holders, bells of gold and copper, jade plaques and beads, avariety of vessels and engraved disks, as well as human skulls and hundreds of human and animal bones. It was here that warriors, children and maidens were thrown from a platform into the deep waters.

To get to Tulum the easy way, contact Veronica about our Tulum & Xel-Ha Adventure.

Tulum — which means “The City of Dawn” — was the city that worshipped the rising and setting of the sun and the only Mayan city built on the coastline. The walled city was a fortress and probably functionied as a trade center for the Maya. There are over sixty structures. The centerpiece, “The Castle/El Castillo” is a large pyramid topped with a temple. It is believed to have been a lighthouse or watchtower. One of the most important structures is “Temple of the Frescoes/Templo de los Frescos” due to the evidence of once-brilliant frescos. There is an entrance charge. English/Spanish tour guides are regularly available and optional. There is a small beach area to cool off. The beach space and shade is limited. Bring hats, sun block, sun glasses, and comfortable shoes. 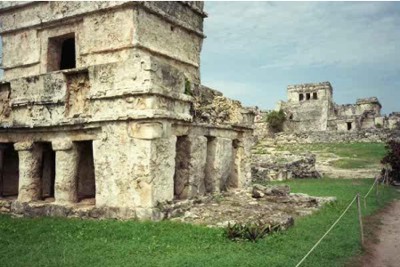 Coba is in the middle of the jungle. There are remarkably huge pyramids dating from 400 to 900 A.D. Most of the structures are too fragile to climb but the jungle is fantastic. Take walking shoes, insect repellent, and drinks.

This is an ecological reserve on the mainland south of Playa del Carmen. To enter the reserve, you must first get permission from the Amigos de Sian Ka'an. If you get the full-day tour they offer, you will get to experience many wonderful things. The tour includes a view of the experimental nursery for plants in which they do much research. Right now, the research is on sustainable-use projects. You will get to take a boat trip that covers at least three lagoons and two canals. There is a Maya temple called Xlaphak that they will tell you all about. You will receive lunch and snorkel in the lagoon. The tour will float you through six miles of waterways past mangroves, exotic flowers that smell like perfume, and many waterfowl. You might see blue herons, belted kingfishers, or more rare birds such as jabiru stork and flamingos. There are also many crocodile as well as their nests.

The recently restored San Gervaiso ruins are located in the central part of the island just off the main highway that crosses the island. The ruins date from the Early Classic Period, (A.D. 300-600) and from the Late Postclassic Period (A.D. 1250-1500) The little "town" is in the middle of a beautiful jungle. The archaeological zone consists of six groups of several buildings each, most of them in the Oriental Coast style. San Gervasio is thought to be a ceremonial center and is connected to other parts of the island by sacbe, or white roads. The majority of the structures were used as altars and shrines and public buildings. Many of the altars on the island were to worship the goddes of fertility, Ixchel. Most of the buildings were in use until the arrival of the Spaniards. They were taken aback by the idol-worshipping and the sacrificial customs of the Maya. You should visit this sacred site. It's a nice walk through the shade and you'll enjoy the history. English-speaking guides are available.

There are a large number of other sites on the island, yet none of them are very well restored. Many are located in the swampy area in the northern part of the island near the lighthouse. You can only get there by boat or by a dune buggy. Going north when you get to the east coast , you will eventually find the largest of all the ruins on this island; El Castillo. El Castillo is Spanish for castle, was as close as the Spaniards could get on a good guess, though this structure was never a castle. But it is an impressive bit of work with two inner chambers in which the coals of even recent offerings can be found, strategically located, facing the rising sun.

There are other vestiges of ancient Maya occupation on the island. The ruins are poorly preserved yet the atmosphere is fantastic. There are huge old trees throughout the village. The homes are brightly decorated with pretty painted pots, lush tropical patios, and winding dirt roads. It's a small scenic village that opens its doors for the annual Cedral Festival between April 30th and May 3rd. They have a fair with typical Mexican foods, mexican music, lots of beer, and people. It's a fun-filled, action-packed week for the whole family.

The southern-most point of the island is called Punta Celerain, best known as El Mirador Beach . The famous Columbia and Maracaibo reefs are just off this point. The actual ruin is a small temple, significant to the Maya of ancient times as a directional guide. The Celarain Lighthouse and restaurant is set on this point, making them one of the most favorite sites to visit. The view from the lighthouse is panoramic and worth a look. The point has a strong undertow due to the current patterns that meet here coming from each side of the island. The Spaniards called the ruin the "tomb of the conch shell" due to the hundreds of broken and whole conch shells that had gathered here from the currents over the years.

This place is commonly called Mescalitos's, after the bar there. This is the point that you'll find yourselves at after going to the other side of the island on the cross road. There is no longer a ruin there. It is a popular spot to stop and take in the beauty of the ocean. There is a small restaurant, and several souvenir shops. It has a broad stretch of white sand beach.

There are no longer any real ruins at the site. It still feels magical and one can appreciate why the Maya thought this was as special spot. There is a broad, wide-open stretch tucked into a small bay area protected somewhat by rocks. The beach is a popular spot because the local windsurfers hang out here to ride the waves. There is also a quaint restaurant, a few rustic rooms for rent (no electricity), and bathrooms. It's a popular place that is used to have surfing tournaments and other beach activities.

Even today, many of the local people show a striking resemblance to carved and painted images of the pre-Columbian Maya. Many locals still speak a Mayan dialect as well as Spanish.